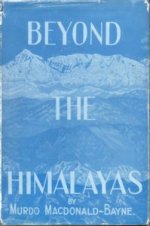 According to the reminiscences of Paul Troxler, a former student, Dr Mac was setting up a healing centre in Cape Town in the 1930s when he received a "spiritual message, urging him to 'Come to Tibet'. ... [W]hen the message came, he left immediately, journeyed through India and reached the Himalayas."
During his 7-month journey in 1936-37 Dr Mac received teachings and training from the Masters, about a year before Rolf Alexander would be studying at the same lamasery. The authenticity of his contacts and experiences is confirmed in Benjamin Creme (1979), The Reappearance of the Christ and the Masters of Wisdom, p.80 and Share International No.10, December 2007, p.27.
One of the remarkable men Dr Mac meets is the Hermit of Ling-Shi-La which, according to Benjamin Creme, is one of the names of the Master Djwhal Khul (Share International No.9, November 2006, p.31).
Some photographs of the author's journey are included in his first book, The Higher Power You Can Use (1945).

This book and its sequel, The Yoga of the Christ, have long been relatively rare because they were withdrawn from sale shortly after being published, following a court action "brought by MacDonald-Bayne's family" (Benjamin Creme (1997), Maitreya's Mission, Vol.III, p.419). In 1973 a hardcover reprint of this book was published by Gordon Press (USA). A new, revised softcover edition was published in 2006 by Mystica Publications of New Zealand, adding notes and maps, as well as some of the photographs from The Higher Power You Can Use.