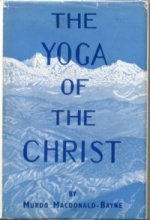 Sequel to Beyond the Himalayas (authenticity confirmed in Benjamin Creme (1997), Maitreya's Mission, Vol.III, p.419).
Murdo MacDonald-Bayne (born 1887) died unexpectedly of a heart attack in a taxi in London on the 26th of February 1955, while returning from a theatre show with his sister, Mrs Chisholm, four days after he gave his second lecture in London.
Dr Mac's name was actually Murdo MacDonald, but he decided to add his mother's maiden name (Bayne, which he was given as his middle name) for his work as an author and lecturer.

A new, revised edition was published in 2006 by Mystica Publications of New Zealand, containing additional notes and maps, as well as some of the photographs from The Higher Power You Can Use. These were combined in one volume as Beyond the Himalayas: with the Yoga of the Christ in the same year.
In 2007 a combined volume of Beyond the Himalayas and The Yoga of the Christ was published as Christ in Tibet (Gentle River Publishing, US). In 2020 a combined volume was published as The Universal Yoga (Aquqo Press, Nigeria).