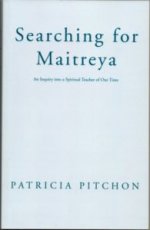 Account of the author's involvement in the search for Maitreya in London in 1987, in which she also engaged other journalists. Her efforts led to her becoming the recipient, along with fellow-journalist Brian James, of the teachings and forecasts of world events of Maitreya via one of His close associates. These were first published in Share International magazine, and disseminated to the world's media via press releases, between 1989-1993. In 2005 a compilation of these teachings and forecasts was published as Maitreya's Teachings -- The Laws of Life, edited and introduced by Benjamin Creme.