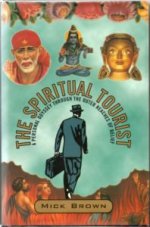 Like a modern-day Paul Brunton, British journalist and radio DJ Mick Brown travels the globe in search of spiritual truths. Interestingly, his quest starts in the autumn of 1984, with a phone call from his friend Van Morrison, the Irish rock musician who is known to have attended several of Benjamin Creme's public talks in London.*
From a review in Share International magazine (April 1998, p.10): "This is a particularly interesting book ... for the first chapter is mainly devoted to Brown's encounters with Benjamin Creme, with whom he first met in 1984 and has been in intermittent contact ever since. Apart from the odd error about what Creme actually meant and said (for example he uses the misleading phrase 'day of reckoning' for the Day of Declaration), Brown presents an intriguing and convincing picture of a man he obviously holds in high regard and even affection, while at the same time acknowledging that he is unable to accept the whole story of the Emergence."
Apart from interviewing Benjamin Creme about the Reappearance story (which the author also used in a radio broadcast where BC invites his interviewer to the meditation room at the bottom of his garden with the apt, if ambiguous, invitation: "Let me lead you up the garden path"), Brown also visits Sri Sathya Sai Baba in India, and the crosses of light in the Copper Ridge Baptist Church in Knoxville, Tennessee (USA), and discusses Mme Blavatsky, Krishnamurti and the Masters, among others.

*Interestingly, on his album Beautiful Vision (1982), Van Morrison refers directly to the Alice A. Bailey teachings and the Tibetan in the lyrics of the songs "Dweller on the Threshold" and "Aryan Mist".