North-South: A Programme for Survival (1980) 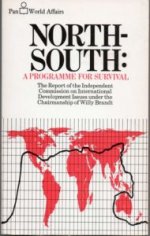 "Maitreya's first political/economic effort, after coming to London in July 1977, was to inspire the Brandt Commission in November of that year. ... With an eloquent introduction by Willy Brandt himself, this Report outlines and recommends the various practical measures which, if implemented, would go a long way to solving the present economic problems of rich and poor countries alike." (Benjamin Creme (1993) Maitreya's Mission, Vol.II, p.561) In The World Teacher for All Humanity (2007, p.72) Benjamin Creme confirms that Willy Brandt (1913-1992) knew Who Maitreya was.
In its report on international development, the Independent Commission on International Development Issues (ICIDI; better known as the Brandt Commission) set out a comprehensive strategy for food, aid, environment, trade, finance and monetary reform -- as well as global negotiations to implement those objectives. The breakthrough consensus in this report amounts to nothing less than the first steps towards the practical implementation of the principles of sharing and co-operation, which have been at the centre of the solutions to the world's problems as proposed by Maitreya and the Masters, and expounded in the books by Alice A. Bailey and Benjamin Creme.
As the Commission writes in chapter 17, 'A Programme of Priorities,' listing "Tasks for the 80s and 90s" that almost literally reflect Maitreya's Priorities as outlined by Himself in His Messages through Benjamin Creme and in the articles by Benjamin Creme's Master: "What limits our response to this challenge, on which the destiny of mankind depends? Not primarily the technological solutions, which are largely already familiar, but the non-existence of a clear and generalized awareness of the realities and dangers and the absence of political will to face up to them and take corrective action. Only in a spirit of solidarity based on respect for the individual and the common good will it be possible to achieve the solutions that are needed." (pp.267-68)
Unfortunately, the Brandt Commission's efforts were thwarted by the coming to power of neoconservative forces in the Western hemisphere, through the election of Margaret Thatcher in the UK in 1979 and Ronald Reagan in the US in 1980. However, the Commission's proposals "are still relevant and will be reintroduced and recommended by Maitreya". (Benjamin Creme (2001), The Great Approach, p.99)

Simultaneously published in the US by The MIT Press.

A second report by the Brandt Commission, Common Crisis, was published in 1983. A 3.0 degree initiate, Willy Brandt, former Chancellor of the Federal Republic of Germany and winner of the 1971 Nobel Peace Price, described the major problems plaguing the world, and their solutions, in less diplomatic terms in a book entitled Arms and Hunger (Pantheon Books, 1986).

See also:
Gerard Aartsen (2015), Priorities for a Planet in Transition
Alice A. Bailey (1957), The Externalisation of the Hierarchy
Stefan Denaerde (1969), Operation Survival Earth