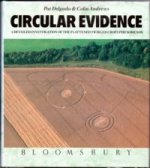 Pat Delgado (1918-2009), a retired electro-mechanical engineer, first encountered a circular indentation in a cornfield at Cheesefoot Head in Wiltshire, UK in 1981. Impressed with the phenomenon, he resolved to make the existence of these circles known to a wider public and set out, with Colin Andrews, to record their findings in this first ever book about the crop circle phenomenon.
In a postscript to the review of this book in Share International No.3, April 1990, Benjamin Creme comments: "These circles, which have been known to 'Ufologists' for several decades, are indeed the result of action by the Space Brothers and their UFOs. They are created and left deliberately as a sign of their presence, the extraordinary structure and precision of the circles being a testimony to their higher science (none of the corn, though folded into spiral and other formations, is ever destroyed)."
In Maitreya's Mission, Vol.II (1993) he adds: "These UFOs come, in the main, from the planets Mars and Venus. Our Hierarchy is in contact with the Hierarchies of Mars and Venus; all the Hierarchies in our system are in contact with each other." (p.209)

About his first publication, Colin Andrews later wrote: "Interestingly, in these early days of the phenomenon, the book was taken quite seriously by both the scientific community and by the media. Today, after decades of counterfeits, and bizarre theories, crop circles have a stigma attached to them and are often lumped into the same category as UFOs and Bigfoot sightings. This is a pity, and hoaxing had a great deal to do with this change in perception." (Crop Circles: Signs of Contact, 2003)