The World Teacher for All Humanity (2007) 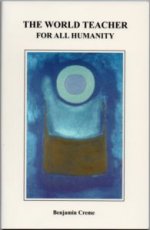 This book gives an overview of the momentous event when Maitreya emerges into full public work. It details the planned return of our planetary Hierarchy and the descent of Maitreya from His Himalayan retreat in July 1977 and of His work in the world, albeit behind the scenes, since then. It also speaks of the enormous changes that His presence has brought about; of His plans and projects, and His priorities and recommendations in the immediate future.
This book contains a photograph of Maitreya's 'hand print' and three b/w reproductions of crop circle photographs from Steve and Karen Alexander's Crop Circle Year Book 2006.

The painting reproduced on the cover is Invocation (painted in 1964).

After having addressed a group at the United Nations building in New York in August 2006, Benjamin Creme was interviewed on camera about his views on the antichrist. This footage was used for what turned out to be a Christian fundamentalist documentary about the alleged masonic connections of the founders of the United States (Secret Mysteries of America's Beginnings, Vol.2: Riddles in Stone -- The Secret Architecture of Washington, 2007), warning that "the New Age Christ" is not "Jesus Christ".