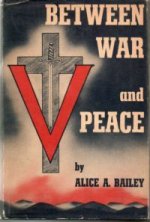 In this all but forgotten book, Alice A. Bailey defines the conflict between the Axis Powers and the Allied Nations as a fundamental spiritual struggle for the victory of the divine nature of man. She contrasts the stated aims of Hitler and Mussolini with the Four Freedoms as pronounced by then-US president Roosevelt. In The Externalisation of the Hierarchy (p.578) the Master D.K. says: "These freedoms [of the individual] have been voiced for us in the words of that great first ray disciple, Franklin D. Roosevelt. They are the four essential freedoms."
Except for chapter 3, 'The Dawn,' the chapters in this book are named after the lights defined in a quotation from Winston Churchill: "In the past we had a light which flickered; in the present we have a light which flames, and in the future there will be the light which shines over all the land and sea."

This book, written during World War II and published in 1942, is not listed in any overview of titles written by Alice A. Bailey. According to Lucis Trust the decision to withdraw it was made by Alice Bailey herself because the book was written to address problems during the World War. Its relevance was lessened when the war ended and therefore it was not kept in print when the first edition expired.
However, in March 1989 Maitreya announced: "The energy which drives soldiers into battle and fills the air with warplanes" has "found a new womb: commercialization, which has been created by market forces" (Benjamin Creme (ed.; 2005), Maitreya's Teachings -- The Laws of Life, p.102). This fact gives renewed relevance to some of the ten 'Realities For Which We Fight', as listed by Mrs Bailey in her book (p.62-64). For instance, instead of "A vision of a way of life which is based on true values and a fair distribution of the world's resources...", the goal of the dark forces is "A vision of material good..." And instead of "Opportunity for all and the fostering of initiative...," she writes, "Standardisation and regimentation is forced upon the masses..."
The latter have indeed found their way into every aspect of human life over the last 20-30 years, with market forces having been given free reign almost everywhere, including health care and education, guised as the relentless drive towards "results" (i.e. accumulation of wealth in the hands of the few), based on "transparency" (i.e. extreme standardization and regimentation of tasks) and "accountability" (i.e. being forced to achieve targets at any cost).

Simultaneously published in Canada by Macmillan (Toronto, 1942). The US edition was reprinted that same year.