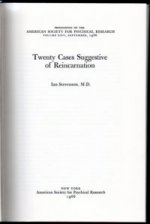 Scientific research into cases where people claim to remember details of past lives provides compelling evidence of the reality of reincarnation.
Before the publication of H.P. Blavatsky's seminal work, The Secret Doctrine, "[r]eincarnation was practically unheard-of in the West, or was misinterpreted as transmigration into animals." (Charles J. Ryan (1937), H. P. Blavatsky and the Theosophical Movement.) According to Benjamin Creme, the concept of reincarnation was left largely undiscussed in HPB's Isis Unveiled because "the Western world was still trying to grapple with the idea of 'survival' after death as introduced by the Spiritualist Movement" (Maitreya's Mission, Vol.I, p.302.), which received its stimulus, according to the Master D.K., from the Master Hilarion (Alice A. Bailey, Initiation, Humand and Solar, p.59).
In his General Discussion at the close of his book Dr Stevenson also references the case of 'the Boy' who, he says, "could show the most dramatic personality changes almost instantly, being one moment quite himself and the next one of 'the Brothers', the distinctly different communicators who manifested through 'the Boy'." (p.328; see also Swami Omananda (1959), The Boy and the Brothers)

Interestingly, the publisher of the first edition of this book, the American Society for Psychical Research, founded in 1885 to investigate "extraordinary or as yet unexplained phenomena that have been called psychic or paranormal", was a branch of the British SPR under the very same Richard Hodgson who conducted an investigation into claims that Madame Blavatsky was a fraud. His report (1885) branded Madame Blavatsky an imposter, but upon proper scrutiny of his methods Mr Hodgson's report was wholly refuted by the SPR itself in 1986, one hunderd years after the publication of the report. (For details, see Sylvia Cranston (1993), HPB, p.xvii.)

A second, revised and enlarged edition was published by the University Press of Virginia in 1974. Dr Stevenson also wrote Children Who Remember Previous Lives (University of Virginia Press, USA, 1987).

A compelling first-hand account of memories of a past life was written by Jenny Cockell, Yesterday's Children (Piatkus Books, UK, 1993; published in the US in 1994 as Across Time and Death: A Mother's Search for Her Past-Life Children). This book was made into a TV film in 2000 under its UK title.