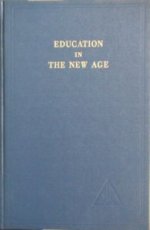 "Knowledge comes from two directions. It is the result of the intelligent use of the five senses and it is also developed from the attempt to seize upon and understand ideas. Both of these are implemented by curiosity and investigation." (p.81)
"Two major ideas should be taught to the children of every country. They are: the value of the individual and the fact of the one humanity." (p.47)
"The new education ... will seek to throw the entire world of effort open to [the child], pointing out that apparent barriers to progress are only spurs to renewed endeavour and thus seeking to 'lead him out' (the true meaning of the word 'education') from any limiting condition and train him to think in terms of constructive world citizenship." (p.83) This definition of education occurred earlier in Problems of Humanity (p.95/1947ed; p.72/1953ed; p.55/1964ed), where the Master DK outlines the function of the three departments -- primary, secondary and higher -- of the coming education in terms of Civilization, Culture and world Citizenship, respectively.
He says that education should be of three kinds: a process of acquiring facts (past and present), a process of learning wisdom as an outgrowth of knowledge, and finally a process whereby unity or a sense of synthesis is cultivated. (p.93-94/1947ed; p.54/1964ed)
"The word 'spiritual' does not refer to religious matters, so-called. All activity which drives the human being forward towards some form of development -- physical, emotional, mental, intuitional, social -- if it is in advance of his present state is essentially spiritual in nature." (p.1)

See also:
J. Krishnamurti (1953), Education and the Significance of Life.