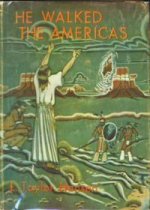 A collection of Native American myths and legends about the White Prophet (the Master Jesus) who went around the American continents and was most widely known by the names of Quetzalcoatl and Kukulcan. The Algonquin asked for His childhood name when He lived across the ocean and called Him Chee-Zoos -- God of the Dawn Light.
Benjamin Creme's Master has confirmed that the Master Jesus taught for many years in Polynesia and North, Central and South America in the 6th and 7th centuries (Share International No.7, July/August 1994). "This fact is known to the Mormons." (Benjamin Creme (2001), The Great Approach, p.195)

Lucile Taylor Hansen (1897-1976) was the daughter of Frank Bursley Taylor (1860-1938), a wealthy amateur geologist who was co-originator of the famous Taylor-Wegener Theory of Continental Drift which is now universally accepted as the basis for the plate tectonics theory of geology, and which she wrote about in Some considerations of and additions to the Taylor-Wegener hypothesis of continental displacement (1946). The author was also an authority on the native peoples of North and South America, having studied among them for 30 years.
Ray B. Palmer, son of the original publisher of the book, says the author "... wrote a regular column for Amazing Stories called 'Scientific Wonders'. She did a lot of Indian legends and folklore in it. She learned of these legends I believe when she was doing her Master's thesis. At first she thought that they were influenced by the missionaries who taught the Indians the stories of Jesus. But then she began to find out that these stories are much older than the time of the missionaries. She finally got them together and put them into a book." (Source: The UFO Forum (2001), 'An Interview with Ray B. Palmer'.)

L. Taylor Hanson apparently also took an interest in flying saucers, having written an article for FATE magazine of September 1949, titled 'Tribal Memories of the Flying Saucers', under the pseudonym of Oge-Make, according to her biography on Wikipedia.

For the Hopi legend about the return of their Teacher, see Robert Boissiere (1990), The Return of Pahana.