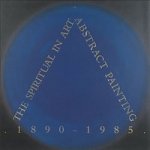 Catalogue for the eponymous exhibition that was held at the Los Angeles County Museum of Art (LACMA) from November 1986 to March 1987, the Museum of Contemporary Art in Chicago from April to July 1987, and the Haags Gemeentemuseum in The Hague, from September to November 1987. In his Foreword director of LACMA Earl A. Powell III writes: "Countless generations of artists have been intrigued by the mysteries offered by spiritual writings and belief systems. In the 1890s interest in the occult and mysticism fused with the genesis of abstract painting, then in its 'embryonic' form." (p.11)
This monumental catalogue especially shows the extent to which Modernism and Abstract art developed in response to the ideas coming from Hierarchy (as documented in Sylvia Cranston (1993), HPB -- The Extraordinary Life & Influence of Helena Blavatsky, Part 7, Chapter 5), while the exhibition featured works by artists who are known to have been strongly influenced by the ideas put forward by H.P. Blavatsky and the Theosophical Society, such as Wassily Kandinsky, Piet Mondrian, Paul Klee, Kazimir Malevitch and many of their contemporaries and successors.
The catalogue lays out the exhibition in 20 articles -- with topics ranging from 'Hidden Meanings in Abstract Art' and 'Transcending the Visible: The Generation of Abstract Pioneers', to 'Esoteric Culture and Russian Society', 'Concerning the Spiritual in Contemporary Art' and 'Occult Literature in Russia' -- which are illustrated with many drawings, watercolours and paintings from books on spirituality, in particular six paintings and a diagram from C.W. Leadbeater's Man Visible and Invisible, as well as 5 colour paintings from C.W. Leadbeater and Anne Besant's Thought-Forms.
The 26-page 'Glossary of Spiritual and Related Terms' includes a further reference to these works: "The color plates in Thought-Forms and also in Leadbeater's volume on auras, Man Visible and Invisible (1902), provide many examples of artists' impressions of these non-objective forms." (p.390) The glossary also features a 2-page article about Theosophy with a portrait of H.P. Blavatsky, which mentions "the promotion of the young Hindu boy Krishnamurti as the human vehicle in whom Maitreya, the coming World Teacher or Buddha, would be manifested." (p.389)

While this exhibition was inspired in part by the 1977 exhibition Art of the Invisible, the fact that Benjamin Creme's symbolic work was not included here is perhaps not entirely surprising given that Sixten Ringbom, one of the "experts" in the field of spiritual art and a contributor to this catalogue, felt it necessary to apologize for his discussion of the occult background of modern art, while referring to the "criminal records" and "repeated involvement in frauds" of H.P. Blavatsky and Charles W. Leadbeater*, thus proving himself, to use Blavatsky's wonderful qualification, another "man of great learning but little knowledge". (See also the article by Benjamin Creme's Master, 'The perennial light of Truth' in Share International No.8, October 2009 about HPB's reputation.)

Includes 462 illustrations, of which 144 in colour.

The frontispiece shows a reproduction of 'Sudden Fright' from A. Besant and C.W. Leadbeater (1905), Thought-Forms.