The Fifth Dimension - The Future of Mankind (1940) 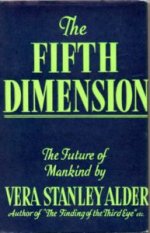 The author calls this book "the result of an experiment in Meditation." After indicating the relationship of the present age of science to the Fourth Dimension, she outlines the possible nature of a Fifth Dimension.
Continuing on her mission to simplify the Ageless Wisdom teaching of the Master DK in the Alice A. Bailey books, she considers the secret processes of evolution, including the true source of the power and the plans which mould visible life.

Along with the first book by Miss Alder, this is the only one that is still in print from Red Wheel/Weiser (US).