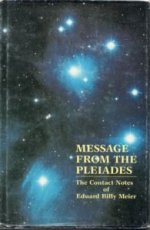 A Swiss farmer born in the town of Bülach, Eduard "Billy" Meier claims his first extraterrestrial contacts occurred in 1942 at the age of five with an elderly extraterrestrial man named Sfath. Contacts with Sfath lasted until 1953. From 1953 to 1964, Meier's contacts continued with an extraterrestrial woman called Asket. Meier says that after an eleven year break, contacts resumed again with an extraterrestrial woman named Semjase, the granddaughter of Sfath. Over his many years of contact, Meier has accumulated a large collection of photographs showing spaceships, many of which are reproduced in UFO... Contact With the Pleiades, Vols. I and II, by Lee and Brit Elders. The current volume contains Meier's contact notes from 28 January 1975 until 16 September 1975.

In a communication from 21 May 2009, Mr Meier was told: "In the scriptures of the ages it is written: 'Love your neighbour as yourself, because he is your own brother or your own sister – into whom life has been breathed.' Therefore, man, put an end to all your hatred, to your greed, to the daily strife, to the murderous wars and acts of terrorism, to all your egotism, self-aggrandisement, to your cravings for revenge, to your jealousy, greed for might and urge for retaliation. (...) Love those next to you as yourself, love your fellow human beings, nature, fauna and flora as well as the planet, which is your home and your aegis."

While fully endorsing the reality of Mr Meier's contacts, Benjamin Creme is "convinced (and informed) that they are with people from our own Solar system. Perhaps Mr Meier thinks, in line with general 'scientific' misunderstanding, that that is impossible, so opts for the Pleiades. I do not know, nor do I greatly care. The contact itself is the important thing." (Share International No.10, December 2010, p.27).

Edited and annotated by Wendelle C. Stevens. Three further volumes of contact notes were published in 1990, 1993, and 1995, respectively.