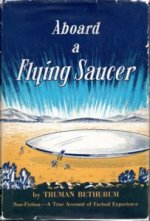 In 1952 Truman Bethurum, a journeyman engineer (road worker), was employed on the Gaviota Highway Tunnel project near Santa Barbara, California, and was called to help with another project on Mormon Mesa, Nevada. It was there, late July 1952, that he sighted a flying saucer and met with extraterrestrials as he was woken up by the mumbling of 8-10 small-sized men (around 1.m50 tall) who were walking around his truck. At the close of the first visit, the lady Space Captain Aura Rhanes told Truman to make the visit "known to the people of your world."
Rather than being invited aboard their saucer for a trip in space, Mr Bethurum is given the opportunity, on seven or eight occasions, to sit down with the captain of the ship and ask her questions about their ship and their planet, which they referred to as 'Clarion'. Much of what he is told corroborates the information coming from George Adamski's contacts. Benjamin Creme's Master confirms that Mr Bethurum's contacts came from Saturn (Share International magazine No.6, July/August 2014, p.28)
For instance, Mr Bethurum is told: "It is true. We never kill anybody. Our enemies fall and disappear before us. Then we go away. They may then rise and go about their business -- if they have done no real damage." (pp.117-18) And: "I also got the impression that cooperation among all of their people is an inherent feature of their lives, and that poverty is unknown. Also, that what we call riches or wealth is certainly more evenly distributed than on our earth. That their people are very busy living and learning, and not worrying what someone else has or does not have." (p.137)
Mr Bethurum (1898-1969) also relates his visit to George Adamski at Palomar on 2 July 1953, who then recorded Bethurum's story to play to visitors at Palomar Gardens. (p.187-88)

Truman Bethurum also wrote The Voice of the Planet Clarion (1957) and Facing Reality (1958).