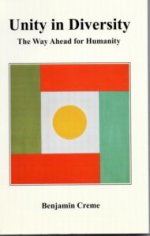 According to Benjamin Creme, humanity is at a crossroads and has a major decision to make: to go onwards and create a brilliant new civilisation in which all are free and social justice reigns, or continue as we are, divided and competing, and see the end of life on planet Earth. This book provides a new, hopeful vision for the future of every man, woman and child, embracing a world at peace in harmony and unity, while welcoming and needing each individual quality and approach.
The core text of this book consists of Benjamin Creme's commentary on his Master's articles 'Unity in Diversity' of May 2006 and 'Maitreya's Priorities' of October 2006, which he gave at the Transmission Meditation Network Conference near San Francisco in August 2006. The edited text of this talk and the ensuing questions and answers were first published in Share International magazine No.1, January/February 2007. The remainder of the book consists of questions that Mr Creme previously answered in Share International magazine, themed around other articles by his Master, such as 'Diversity in political forms' (December 1982), 'The case for sharing' (March 1987), 'The path to Unity' (July/August 2011) and 'Youth at the helm' (April 2012) and several articles highlighting Earth's precarious condition, such as 'Saving the planet' (May 2007). The final section consists of an extensive answer Benjamin Creme gave about the crucial relation between the speed of change and humanity taking its responsibility.

The painting on the cover is Mandala - Unity in Diversity, painted c.1969.