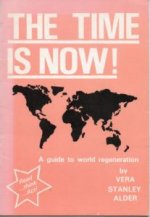 After the author's second book was published in 1939, she received requests from all over the world to form a fellowship and publish a magazine, "to implement the ideas and ideals expressed in the books". (p.29) This the author did under the name of Order of World Guardianship and this brochure was "written as as an initial Guide to the theme and practice of World Guardianship", providing brief introductions to such notions as the underlying vision of the teaching, the hoped for reactions, spirituality and science, vegetarianism, world healing, et cetera.
The author also refers to the renewed interest in her work "since my series of books were put into Paperback", starting in 1969.

In the introduction Mrs Alder refers to the work of Gerald Massey who "explained that the Christ story was not new, but had existed in Egypt for thousands of years. The Egyptians called Him the EVER-COMING ONE. They taught that He appeared at the beginning of every Zodiacal Sign or Age (every 2160 years) to bring a new chapter of Teaching to humanity, in line with the process of evolution.
"Christ Himself told us that He would be with us at the end of the Age. It is now the end of the Piscean Age. Other Faiths also expect Him, under the names of the Messiah, the Maitreya and the Avatar. The disruption and stimulation everywhere in the world is due to the influence of the new Aquarian Age.... Everywhere humanity is dividing into two camps -- those who cling to the old ways, and those who rebel and seek for new ways." (p.3)

A third reprint of this pamphlet appeared in 1977.