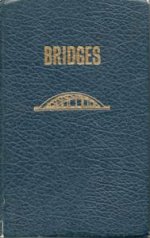 In Bridges Aart Jurriaanse summarizes many of the basic concepts in the teachings by the Master Djwhal Khul via Alice A. Bailey, in two parts: 'Man in the Universe' and 'Man on the Path of Life'. For the production of this book the author compiled and classified 8,000 references from the Tibetan's writings, which he published separately as the Reference Guide to the teachings of DK by Alice A. Bailey (World Unity and Service, Craighall, SA, 1978).

"If Bridges has satisfied the reader's demands for esoteric knowledge, then it has failed in its purpose," the author explains in a note in the Reference Index (p.477), expressing his wish that his work will be "a stimulant to provide the impetus to delve ever deeper into the original works of the Tibetan."

From January 1982, its first issue, until July 1998 Share International magazine published many, if not all, chapters from Bridges.

Later editions were published until 1985 by the Sun Centre School of Esoteric Philosophy, South Africa. Republished in 2001 and 2007 by Bridges Publishing, Germany, now an imprint of Verlag H.J. Maurer.