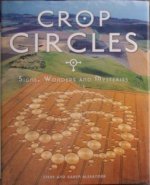 This book contains a selection of more than 280 of Steve Alexander’s photographs of crop circles in south-west England, and provides a fascinating categorization of the various shapes and figures in which the crop circles have appeared and evolved over the years – from the circle to the dodecagram, and from fractals to spirals and stars. It also serves as a wonderful illustration of how the crop circle designs have developed since the publication of Colin Andrews and Pat Delgado’s Circular Evidence (1989) – which was equally impressive at the time.

According to Benjamin Creme, the crop circles “are all ‘ideograms’, and if you were familiar with the ‘ideography’ of ancient Atlantis you would recognize some of them. They are not meant to be recognized as to their meaning but that they do have a meaning, and many people will ‘intuit’ these. They are a reminder of the ancient connection with the Space Brothers.” (Maitreya’s Mission, Vol.II, p.210)

The front cover photograph was used earlier for the Crop Circle Year Book 2001, in which year the formation appeared.
Images taken by Steve Alexander also feature in an insightful film documentary investigating the crop circle phenomenon, Crop Circles. Crossovers from Another Dimension, by Torje Toftenes (Norway, 2005). Other documentaries for which Alexander's images were used are Star Dreams. Exploring the Mystery of the Crop Circles by Robert L. Nichol (Canada, 2004; re-released on DVD in 2007 with additional footage of crop circles in North America), and What on Earth? Inside the Crop Circle Mystery by Suzanne Taylor (2009).

A paperback reprint was published in 2014.