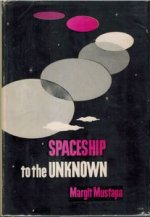 Born in Helsinki, Finland, Margit Lilius (1899-1991) was a successful ballerina at the Helsinki National Opera before she emigrated to the US in 1947 where she married Andrew Mustapa and settled in Seattle, Washington. Before her departure for the US, Mrs Mustapa had met with a "medium" one last time, whom she says received "telepathic messages" from "the most elaborate, strict, challenging class of teachers. (...) These masters were already living in our world! (...) As a thief it had come upon us. Didn't Christ tell us that the time He is coming no one knows, only the heavenly signs are speaking, predicting the coming era of light?" (p.228) She had her first sighting of "flying discs" over a forest in Finland in 1943, while later sightings occurred in America, the first in August 1950, where she had several encounters with Brothers and Sisters from space.
Far from being a mystical account, Spaceship to the Unknown is the reflection of Mrs Mustapa's personal search for meaning and truth, during which she studied Goethe and went to hear Krishnamurti speak on many occasions, even staying at Ojai Valley for many months, where she worked as housemother at Happy Valley School. As such, this book exhibits the author's deep understanding and ability to actually live the teachings of Krishnamurti.
Surprisingly, this volume opens with The Great Invocation, which was first given to the world by the Master DK in 1945 (see Alice A. Bailey, Discipleship in the New Age, Vol.II), and it seamlessly brings together the teaching of Krishnamurti about a new world, the ageless wisdom and the coming of the space visitors: "The signs of Aquarian age were predicting the coming of a new mankind. What I am that will the world be. How can man stand still and be ignorant and awkward in his turnings and ponderings when the skies are full of visitors from other planets and are calling for a higher understanding of what universal outlook means in our present-day life." (p.123)