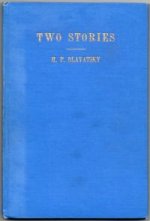 Two occult stories which HPB wrote for Lucifer magazine ('Karmic Visions', June 1888) and The Spiritual Scientist ('An Unsolved Mystery', November 1875). The second story is about Count Cagliostro, a friend and pupil of the Master Rackoczi in His manifestation as the Count of St Germain. According to Benjamin Creme Cagliostro was a previous incarnation of H.P. Blavatsky (Share International Jan./Feb. 1991, p.25, and Maitreya's Mission, Vol.II, p.337).
The foreword by C.J. (C. Jinarajadasa, one-time President of the Theosophical Society in Adyar) states that HPB had told some of her pupils that in writing stories she received help from the Master Hilarion, "who was particularly gifted in that manner" (p.vi).
The Foreword also relates the story of how HPB's assistant editor of Lucifer magazine in London, Bertram Keightly, uncovered a forgotten poem by Alfred Tennyson (The Gem). Although it had only been published once in a short-lived literary magazine in 1831, HPB had nevertheless quoted two stanzas from it as the preface to the story 'Karmic Visions'.

Later combined with the stories from Nightmare Tales (1892), and the occult stories by W.Q. Judge, as The Tell-Tale Picture Gallery (1942).

With a frontispiece portrait of the author.