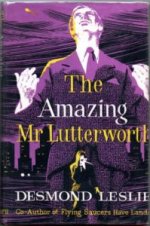 One of several fiction books which Desmond Leslie wrote, both before and after co-authoring Flying Saucers Have Landed with George Adamski, The Amazing Mr Lutterworth "was 75 per cent non-fiction ... and the principal character of the plot was, of course, George Adamski," according to the author. (See Lou Zinsstag (1983), George Adamski -- The Untold Story, p.78.)
Though there is a character in this book, Elias Minovsky, who is modeled after Adamski and who lives on Mount Ramolap (Palomar spelled backward) "writing cockeyed philosophy that no one will publish" (p.57), and making vague photographs of flying saucers, the real Adamski in this novel is the protagonist, John Hollings Lutterworth.
The fictional story follows Mr Lutterworth as he tries to remember his mission to save humanity from the consequences of corporate greed by providing all the nations of the world with an extraterrestrial device for the production of unlimited energy. It is interspersed with matter-of-fact references to the cosmic philosophy of Universal Law as expounded in Adamski's book Inside the Space Ships.

The grand finale of the story seems to anticipate the events on the Day of Declaration, but on a smaller scale, when it describes a scene where all members of the General Assembly at the United Nations (78 in 1958) are being mentally overshadowed by Mr Lutterworth while he remembers his true status as one of the Space Brothers and gives them the key to the salvation of the world and the inauguration of the "Time of Splendour". While each "hears me in his own tongue" (p.200), as the Brother describes the scene, he tells them: "No more shall groups, nor even single men, be able to rule multitudes through hunger in their bellies; for there shall be no more hunger nor want nor cold..." (p.202)
Benjamin Creme has confirmed that George Adamski was indeed a Space Brother who had incarnated on Earth for a specific purpose (see the Preface to Georgio Dibitonto (1990), Angels in Starships, p.[viii]; and Share International No.8, October 2008, p.9).
In Share International No.7, September 2005 (p.15), a report from the Pravda website about a nine-year-old boy who claims to be from Mars was confirmed by Benjamin Creme's Master.

The author dedicated this book, among others, to "G.A.". A review of it was published in Share International No.8, October 2008.

A Digit Books paperback edition was published by Brown Watson (London) with the subtitle An Extraordinary Journey Into Time... And the Human Mind!

Desmond Leslie (1921-2001), descendant in an Anglo-Irish line of aristocrats and a 1.5 degree initiate, was also a screenwriter (he wrote the script for the film Stranger from Venus, 1954) and director. He was a pioneer of electronic music, composing what he called "musique concrete" for sound effects to a dozen Shakespeare plays in the Living Shakespeare series (Odham Books, UK). Recordings from his privately published album Music of the Future (1960) were used in mystery and science-fiction TV series, such as some of the early Dr Who episodes.