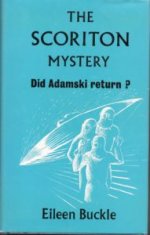 UFO researchers Eileen Buckle and Norman Oliver team up to relate in this book how Englishman Arnold Bryant was contacted by a Venusian in a UFO that had landed near Scoriton, Derby, UK, who called himself "Yamski" or something that sounded very similar, and who was believed by the author and her fellow investigator to be Adamski returned. Benjamin Creme confirms that this Space Brother was in fact the same being who had died the previous day as George Adamski. (See Share International No.8, October 2008, p.9) Chapter 3 tells the story of George Adamski as the first contactee of the Space Brothers.
Interestingly, in his obituary for George Adamski Desmond Leslie alludes to the possibility that his one-time co-author might return: "He gave his utmost to the work and the world will never be quite the same place again, richer for his coming, a little poorer for his going. But I don't believe by any means we have seen the last of him. If he is reborn on another planet he has promised to come back and contact us when possible. With George anything could happen. And usually does!" (Flying Saucer Review, July/August 1965. Reprinted in the current volume, p.43-44, as well as in Gray Barker's Book of Adamski.)

According to Wendelle C. Stevens, in his Preface to Giorgio Dibitonto's book Angels in Starships, Benjamin Creme told him during a meeting in 1990 that Adamski did in fact come from Venus.

Chapter 22, "A Further Visit to Scoriton" reports an extensive interview with Arthur Bryant about his encounter, while the book also looks into other reported UFO landings. In addition, there are references to Paul Brunton's A Search in Secret India (p.237) and to Swami Omananda's The Boy and the Brothers (p.238).

Norman Oliver later published a follow-up report in which he concluded that the Scoriton episode had been a hoax after all. The basis for his revised conclusion was a statement from Mrs Bryant whom Mr Oliver had contacted shortly after her husband had died. Chances are that, in the circumstances she just wanted to be left alone and therefore told Mr Oliver her husband had made it all up.