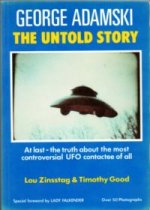 As Adamski's main contact in Switzerland Lou Zinsstag, the author of "Part One: The Man I Knew", documents little-known inside and background information on George Adamski and his contacts – terrestrial and extraterrestrial. Adamski mentions the author in his book Flying Saucers Farewell (1961).
A second cousin of Carl Gustav Jung, who himself wrote about the UFO phenomenon in Flying Saucers – A Modern Myth of Things Seen in the Sky (Routledge & Kegan Paul, 1959), the author discusses her meetings and talks with C.G. Jung about Adamski in Chapter 5 of her book.
Although for a time she was one of Adamski's close associates she later began to doubt his claims about trips to Saturn which he described but, being a contactee herself, she felt that overall Adamski was unjustly maligned and denigrated. In Chapter 1 she quotes an article in an unnamed hand-printed magazine about Adamski's early years: "After a short period of formal schooling he was taught by private tuition." (p.4). On page 5 she expresses her suspicion that, as his parents were poor, the young Adamski "must have enjoyed tuition by a teacher or a guide, connected with a group in Tibet". (Confirmed by Benjamin Creme in Share International No.8, October 2008, p.9)
Part Two of this volume, "The Investigation", was the first publication on UFOs by Timothy Good, who went on to become one of the foremost UK authors on UFO cover-ups and related subjects. While Zinsstag's contribution sets out to rehabilitate Adamski, Good's part is a critical evaluation of Adamski's claims.

The unedited manuscript of Ms Zinnstag's part in this book was later published by Wendelle Stevens as George Adamski - Their Man on Earth (1990). Timothy Good reworked chapters from his part for chapters 6 and 7 in his book Alien Base - Earth's Encounters with Extraterrestrials (1998).

Mrs Zinsstag's first book, UFO Sichtungen über der Schweiz. 1949-1958 ("UFO Sightings Over Switzerland"; UFO Verlag, 1958), was only published in German.
Many photographs from her personal archives appeared in the UFO issue of the multi-lingual Swiss art monthly The Village Cry No.5, 1977: "A network of contacts throughout the world has enabled her to build up a collection that is the only one of its kind in Europe. Several times Mrs Zinsstag has approached publishers and magazines offering them the use of her collection. Her approaches were met with disdain." (p.3)

This book has a special foreword by Lady Falkender, member of the House of Lords All Party UFO Study Group.

Includes a further 24 unnumbered pages of photographs and facsimile reproductions (232 pages in total).

CETI Publications was set up by Timothy Good only for the purpose of publishing this volume, although he has used the name for some other ventures since.