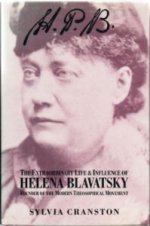 Sylvia Cranston (nom de plume of Anita Atkins, 1915-2000) wrote the definitive Blavatsky biography, and an absolute page-turner at that, piecing together HPB's life and travels in a manner that is as lively as it is scholarly, with fascinating details and always quoting at least two independent sources before accepting something as fact.
In The Art of Living Benjamin Creme writes (p.135-36): "The teaching of much of the world had reached [a limit] when The Secret Doctrine, for instance, H.P. Blavatsky's major opus, was published... The religionists of the time took exception to everything that was put forward by Madame Blavatsky. So, too, did the scientists of the time... [She] is still reviled as a fraud, a medium, who cheated in mediumistic séances (which she never did, did not need to) and so had a terrible reputation thrust upon her. This is really because the ideas stemming from Hierarchy are absolutely explosive."
Blavatsky's closing words in her Preface to The Secret Doctrine perhaps best reflect the vicissitudes experienced by this great Initiate: "It is written in the service of humanity, and by humanity and the future generations it must be judged. Its author recognizes no inferior court of appeal. Abuse she is accustomed to; calumny she is daily acquainted with; at slander she smiles in silent contempt. --HPB"
Cranston documents the little known fact that the infamous 'Hodgson report', which was commissioned by the Society for Psychical Research (SPR) and based on which HPB is still perceived as a fraud by many today, was wholly and unequivocally revoked by the same SPR a century (!) later, in a 1986 press release to the newspapers and leading magazines in Great Britain, Canada and the USA, with the headline: "Madame Blavatsky, co-founder of the Theosophical Society, was unjustly condemned, new study concludes" (HPB, p.xvii). See also the article by Benjamin Creme's Master (Share International No.8, October 2009), 'The perennial light of Truth', about HPB's reputation.

In Part 7, 'The Century After', Chapters 4, 5 and 6, the author documents how the ideas which Mme Blavatsky brought to the Western world influenced and inspired not only noted scientists, writers and composers in the early 20th century, but also several of the great artists at the beginning of the Modern period. (See also Alf Corlett (1977), Art of the Invisible and Michael Tuchman et al (1986), The Spiritual in Art: Abstract Art 1890-1985.)

In 2001 a third, revised edition was published by Path Publishing House.