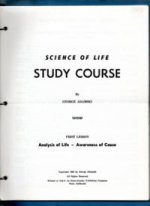 Course in twelve lessons of 4-5 unnumbered Letter-size pages each, released one lesson at a time between 1964 and January 1965 to those who had completed a Qualification Questionnaire, mostly members of the international Get Acquainted Program (GAP) established by Adamski in 1957 to promote the Cosmic Philosophy of the Space Brothers. According to UFO Contactee, the GAP Japan Newsletter, GAP associates convened regular meetings to study the contents of the course and its effects. (Source: International Edition No.3, March 1987, p.12.)
The course is intended to help readers understand the world of meaning, or causes, behind the world of forms, or effects, and so become individuals in whom the "ego mind" (personality) is aligned with "consciousness" (soul).
In the First Lesson, the author writes: "...We are not only going to develop our minds with the help of consciousness, but also expand our conscious perception at the same time. And in this way we shall see the Creator face to face through the mind and the consciousness as they become one. This is the method that the planetarions or space people use in their development."
In Lesson Twelve, he says: "The lessons that you have received have been blessed by the Brothers for each individual's purpose. And they should be honored as an individual gift containing an everlasting avenue of development. ... This series of lessons will be just as good 20 years from now as they are today, for there is no end to their revelations."

As late as December 1989 Daniel Ross, author of UFOs and the Complete Evidence from Space (1987), announced the founding of the USA chapter of GAP in the first (and apparently only) issue of its newsletter UFOs and Space Science, but it has not been heard of since. The only surviving GAP branches in 2008 are in Denmark and Germany, while the Japanese chapter is still active under a different name (Cosmic Consciousness).

This Study Course is still available from the George Adamski Foundation.