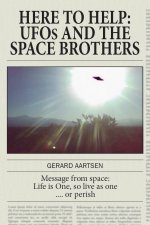 From the understanding that the UFOs (i.e. space craft from other planets) are real and testify to the fact of the universality of life, this book covers several important aspects of the extraterrestrial presence:
- The concerted efforts of the economic and military powers to cover-up the fact of the ET presence, leading to confusion and fear among the public, and an increasing number of conspiracy theories among UFO researchers;
- There is a growing number of officials and dignitaries around the world go on the record with their first-hand experiences of ET craft and/or people;
- Since the 1950s the extraterrestrial visitors have engaged in multiple consistent efforts to introduce themselves to (groups of) individuals on Earth;
- In addition to neutralizing the destructive effects of radiation from nuclear tests and nuclear power plants, the visitors have been working alongside Earth scientists to share their understanding of life and the technology they have derived from that;
- Full disclosure of the ET presence is drawing closer as humanity's sense of its essential oneness, and of its responsibility for the evolution of the planet, is reflected in the demand for universal justice and freedom, with the emergence of the World Teacher and the Masters of Wisdom into full public view.

The title of Chapter 5, 'Inside the space ships', about the technology used and shared by the space people, is a tribute to George Adamski's seminal book about the benign intentions of the space visitors, Inside the Space Ships.
Included are several rare photographs of an ET pilot and the interior of a flying saucer's control cabin from out-of-print books by Italian consul Alberto Perego, that were never published outside Italy.