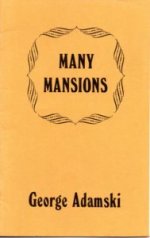 Transcript of a press conference with the ministers of Detroit in September 1955 in which George Adamski challenges the religious leaders and gives some of his experiences with the space visitors, while allying these with Biblical history. The lecture was followed by a question and answer period, which is also included in the transcript.
Towards the end of his lecture, Adamski says: "There are a good many cases of contacts but the people didn't have the nerve to tell about it for fear of criticism. And I will tell you honestly that I, too, would not have come out as much as I have, had it not been for that first contact [in November 1952] and the four people who were with me ... Williamson and the others (Mrs Williamson and Mr and Mrs Bailey), who went to Phoenix, Arizona, and gave the story to the [Phoenix] Gazette. Once that came out I was on the spot completely and there was nothing else to do. And once you stick your neck out you might as well go ahead with it." (p.10)