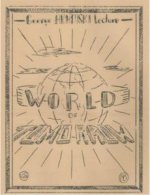 Transcribed from a tape recording of a public lecture by George Adamski at the Detroit Institute of Arts on 20 September 1955.

In his talk and his answers to questions Adamski makes several predictions about life on Earth that would most likely have materialized if the reality of the extraterrestrial visitors had been openly acknowledged and welcomed, instead of hidden from the public.
Adamski also made some references to the end of the old age: “[I]t states in our own Bible that in the latter days (as we might call it at the moment) that when these things will be happening … like ‘signs in the sky and war and rumors of war’ … we will have come to an end of a cycle, or as some people call it, a ‘dispensation’.” (p.1) And: “It’s not only our own earth but the whole system that is going through a change which is a cycle that is coming to an end and another will take its place.” (p.4)
He also refers to what students of the Ageless Wisdom teaching would recognize as the keynote of the New Age -- Unity and Synthesis: "There is something transpiring in this world that we never dreamed would take place in our time, but it is taking place... the tencency toward a United World.
"Why not? If we do admit there is a great power which has put us here and has also created this world. I believe, myself, that this power meant for all that were placed upon this planet to be as a family, not as strangers..." (p.5)