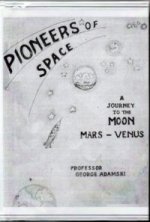 Although presented by the author as being "at present in the field of fiction" (p.6), this is the first book in which Adamski writes about space travel and life on other planets based on his own experiences and contacts.
It has been alleged that Adamski took “fictional material” from this first book and presented it as fact in his subsequent books Flying Saucers Have Landed and Inside the Space Ships. Benjamin Creme, however, confirmed the notion that Adamski merely presented the facts of his contacts with the Space Brothers as fiction in this book to test the public reaction to the idea of life on other planets (Share International No.3, April 2007, p.27). And in Pioneers of Oneness (2020), Gerard Aartsen shows how consciousness research provides ample substantiation for the notion that Adamski describes authentic out-of-body experiences, which he presented in the fictionalised context of a physical journey. In a letter of 16 March 1950 Adamski explained “how one may venture from one place to another, while his physical is in one place and he is in another. That is the way I have written this book.”

In an article in Fate magazine No.21 (‘I Photographed Space Ships', July 1951, p.72), Adamski referred to this book to prove that he had not borrowed the notion of a magnetic repulsive force – for protecting space ships from meteorites and dust particles -- from Frank Scully’s book Behind the Flying Saucers (1950), as he had already put forward that same idea a year earlier in Pioneers of Space. Fate magazine was the first to publish a photograph of Adamski’s in its September 1950 issue accompanying an article co-written by Adamski, entitled ‘Flying Saucers As Astronomers See Them’.

While the dust jacket has the word “Journey” in the subtitle, the front board and the title page of the book use the word “Trip”.

A softcover reprint was published in September 2008 as Pioneers of Space – The Lost Book of George Adamski by Inner Light/Global Communications (USA), which also includes a reprint of Adamski's first book, Wisdom of the Masters of the Far East, the article from the Los Angeles Times of 8 April 1934 about the founding of the Royal Order of Tibet (which had earlier been reprinted in 1994 in the newsletter of the Sapporo chapter of GAP Japan), as well as the July 1951 article from Fate magazine. This reprint originally came with an audio CD of a lecture by George Adamski at Caxton Hall, London, on April 28th, 1959.
In November 2010 another reprint of this title was published by Black Cat Press, followed in 2017 by yet another (anonymous) republication.