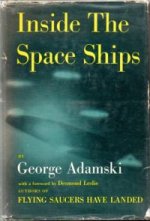 George Adamski’s own, direct experiences aboard a Venusian mothership and a Saturnian mothership. On these trips, in February and April 1953 respectively, he meets Orthon and Kalna from Venus, Firkon and Ilmuth from Mars, and Ramu and Zuhl from Saturn. Although the names which Adamski gives to these Space Brothers (and Sisters) are his own invention, he says they are not without meaning. All of the Space Brothers introduced here by Adamski are also met by Giorgio Dibitonto in 1980, as described in his book Angels in Starships.
Inside the Venusian mothership, Adamski “had long conversations with the Venusian Master who, I think, was the Master of the ship, the chief person on board.” (Benjamin Creme, Share International No.6, July/August 2004, p.10) “The only thing he omitted to say (he was probably unaware of the fact) was that he was out of the body during the whole experience.” (Share International No.4, May 2002, p.27).
During these conversations the Space Brothers made it clear that contacts had been made in every nation and with the leaders of every nation, so that the coming and going of the spaceships was no secret to officialdom: “...your air forces and your governments know that our ships seen in your skies are from outer space, and that they can be made and piloted only by intelligent beings from other planets. Men high in the governments of your world have been contacted by us.” (p.99)
Further teachings from the same Venusian Master were published later in George Adamski (1961), Cosmic Philosophy.
The teaching "was so profound that it changed the thinking of thousands of people who read the book. It was not the only source of that teaching, but was very much akin to that given out by the great teachers of this world, such as Krishna, the Buddha, the Christ, and Mohammed. (...) It is profoundly transforming and closely resembles Maitreya's teaching today, for example when He talks about the oneness of humanity, the need for sharing, justice, right relationship, and above all, the utter necessity for peace. This is emphasized over and over again in the teachings given by both Maitreya and the Venusian teacher. Adamski ... brought this teaching back home and made it known. It fits perfectly with the core of the New Age teaching, given by our spiritual Hierarchy through Helena Petrovna Blavatsky, Helena Roerich and Alice A. Bailey." (Creme (2010), The Gathering of the Forces of Light, p.9)

Referenced in Benjamin Creme, The Reappearance of the Christ and the Masters of Wisdom (p.13, 1979ed).

The photograph reproduced on the dust jacket is the last in a series of four which Adamski took on 5 March 1951, of a cigar-shaped mothership with scout ships coming out of its hull.

Published simultaneously in Canada by Nelson, Foster and Scott Ltd, and in the UK in 1956 by Arco Publishers & Neville Spearman. Later re-published as Inside the Flying Saucers (Warner Paperback Library, US, 1967).

This volume is still available, combined with Adamski’s part from Flying Saucers Have Landed, from the Adamski Foundation, while the original book has also been republished in 2014 (US) and 2018 (NZ) by other publishers.