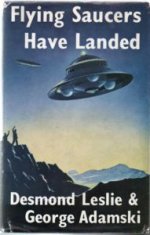 “It was about 12.30 in the noon hour on Thursday 20 November 1952, that I first made personal contact with a man from another world. He came to Earth in his spacecraft, a flying saucer. He called it a Scout Ship.”
These are the famous lines in Part Two of this book (p.185) in which George Adamski relates his meeting with “a human being from another world” near Desert Center, California, USA.
According to Benjamin Creme, George Adamski was a 2.0 degree initiate. His descriptions of the Space Brothers are “accurate” (Benjamin Creme, Maitreya’s Mission Vol.III, p.340). “I worked very briefly with George Adamski during a visit he paid to this country [UK], and can vouch for the authenticity of his contacts from my own experience.” (The Reappearance of the Christ and the Masters of Wisdom, p.13)
In part One of this book co-author Desmond Leslie recounts the history and background of the flying saucer phenomenon, for which he uses ample references to books by H.P. Blavatsky, C.W. Leadbeater, A. Besant, A.P. Sinnett, W. Scott Elliot, and Alice A. Bailey. Leslie also describes an encounter with the proprietor of a bookshop in Museum Street, London, which he felt the urge to enter while on his way to the British Museum. The shop owner said: “I have a book I think will interest you,” (The Children of Mu by James Churchward) in which aerial craft is described that were used during Atlantean days (p.84). Benjamin Creme confirms the gentleman was Maitreya (Share International No.6, July/August 2005, p.37).

Also referenced in Benjamin Creme (2010), The Gathering of the Forces of Light – UFOs and their Spiritual Mission.

A US edition was published simultaneously (The British Book Centre, NY, 1953) with the same dust jacket design.

Historical film footage of Adamski, and interviews with Leslie and some of Adamski’s close associates appear in a film documentary entitled UFOs: The Contacts – The Pioneers of Space (Michael Hesemann, 1996), re-released on DVD in 2006 as UFO Secret: Alien Contacts – The Best Evidence.