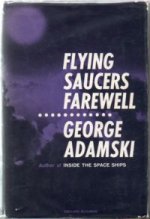 This volume consists of three separate parts. The first, untitled, contains a summary of the teachings of the Space Brothers and Adamski's answers to questions from the audiences at his talks. The second part, "The World Tour," is a chronology of his world speaking tour, culminating in a royal audience with Queen Juliana of the Netherlands in 1959 which was widely, if less than favourably, reported by the world's media, including Time magazine. The third part, "Satan, Man of the Hour", is an updated reprint of a brochure which Adamski published in 1937. It is a short allegory about mankind's inability to overcome its separativeness and strife, as the major obstacle to receiving new teachings and technology.

In Book II Adamski describes how, inundated with questions from readers of Flying Saucers Have Landed around the world, the Space Brothers suggested -- around 1956 or 1957 -- establishing an international network of correspondents, which Adamski named the Get Acquainted Program (GAP; p.122-23). The members of GAP (or IGAP) received regular updates from Adamski through their national contacts and his 1959 world speaking tour took Adamski to the countries where GAP branches had been or would be established.
While in Australia, Adamski writes, "I had an opportunity to see the Russian motion picture, Blazing a Trail to the Stars. Several scenes in the film were nearly identical with things that I had seen inside the huge space ships. Some of these were things I had never mentioned to the public. Perhaps a Russian had been inside the spacecraft also?" (p.139)
In chapters 5 and 6 of Book II, about his visit to Switzerland, Adamski gratefully mentions Mrs Lou Zinsstag, who later wrote about her experiences with the author in George Adamski -- The Untold Story (with Timothy Good; 1983). He also writes about an incident in Zurich involving members of the Silence Group, which he elaborates on in the article 'My Fight With the Silence Group', that was published in Gray Barker's Book of Adamski.

In the conclusion to this book the author writes: "My preliminary studies, which began with the advent of flying saucers, have now been completed... The knowledge shared by our space brothers must now be put to work." (p.189-90)

Published simultaneously in the USA, Canada and the UK, with the American edition published in grey-green cloth boards and the British edition in orange-red cloth boards. Re-published in paperback as [The Strange People, Powers, Events] Behind the Flying Saucer Mystery (Warner Paperback Library, 1967; reprinted 1974). In 2016 the George Adamski Foundation published an updated paperback edition titled Behind the Flying Saucer Mystery II, which was first announced in a GAF newsletter in 1998.

The recording of the lecture in London on 28 April 1959 which the author mentions (on p.149) is included on a bonus audio CD with the 2008 reprint of Adamski's Pioneers of Space.