The Reappearance of the Christ and the Masters of Wisdom (1978) 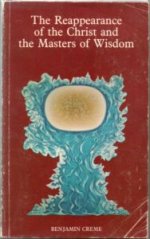 Benjamin Creme's groundbreaking first book was compiled from edited transcripts of his public talks and many question-and-answer sessions during his public meetings in London, which he has been giving since 1975. Parts of this book were first published in a 60-page brochure in 1978, together with excerpts from the Introduction in this edition and three of the Messages from Maitreya.

Benjamin Creme is one of five disciples in the world, one each in every major spiritual centre -- London, Geneva, Darjeeling, Tokyo, and New York -- who were asked in some form or other to make the first approach to the general public about the imminent reappearance into the everyday world of Maitreya, the World Teacher. In the fascinating Preface to this book he describes how, after some initial training in receiving messages from his Master through mental telepathy, he was contacted by Maitreya directly in 1959 (p.14).
Starting in 1972 he was prepared for his work as the herald for Maitreya and Hierarchy by his Master, Who "subjected me to the most intensive period of de-glamorisation, disillusioning, training and preparation" to become His "window on the world" (p.15). In 1974 the Master gave him a list of 14 names of people whom Creme invited for his first talk on "meditation and related subjects", which was held at his home. In June 1974 he started receiving a series of messages from Maitreya, keeping the group informed of the progress of His externalization. After having been pushed by his Master several times, Benjamin Creme gave his first public lecture about the Reappearance of the Christ on May 30th, 1975 (p.18-19).
"On Tuesday, July 19th [1977]", writes Benjamin Creme, "my Master told me that Maitreya had now arrived in His 'point of focus', a well-known modern country." (p.20-21)

The author's many references to books by other authors formed the inspiration for this online library.

See also:
Alice A. Bailey (1948), The Reappearance of the Christ 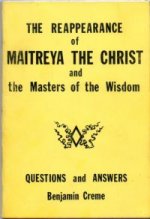