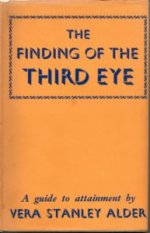 During a successful career as a portrait painter, Vera Stanley Alder began to investigate the Ageless Wisdom -- the vast body of information dealing with the meaning and purpose of man himself and the constitution and evolution of the whole universe. She made it her task to simplify and summarize this knowledge, in order to present it to others.

Mrs Alder was one of the disciples in Alice Bailey's group receiving personal instructions from the Master DK, which were later published in Alice Bailey, Discipleship in the New Age (2 vols).

This book is "an attempt to trace in brief and simple language the progress man has made as he has travelled along the way of truth... It seeks to penetrate behind the outer world of seeming to the world of spirit." It is of note because Alice A. Bailey wrote the Preface

The popularity of Mrs Alder's books reached new heights when they were republished in the US by Samuel Weiser Inc with the advent of the counterculture or hippie movement in the late 1960s and early 1970s. In her Author's Notice to the revised 1968 edition Mrs Alder wrote: "Together we are watching the transition from the old age into the new age, and we are offering our thought and our prayers for the expected event of the 'Second Coming'." Currently, only the first three of her books are in print.
Interestingly, in the 1990s American author Gary Zukav rose to fame in the US with a similarly popular rendition of the Alice A. Bailey teachings in his book The Seat of the Soul (1990) and his appearances on the Oprah Winfrey show.