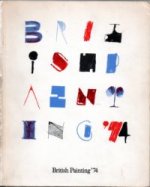 Catalogue for the British Painting '74 exhibition held in London from 26 September - 17 November 1974, the second in a series of Arts Council exhibitions. Benjamin Creme contributed two of his symbolic paintings to this exhibition, 'Chalice' (1973-74) and 'Lotus' (1973-74). The former was reproduced in this catalogue in b/w, along with biographical notes and a brief statement by the artist on his current work.
"Each artist was invited to show work in the exhibition, but also to propose the names of up to ten other painters whom they would want to see there... The names proposed should not include artists born within five years of the proposer's birth date, either forward or back... Ideally, I hoped that what would come of it would be a wider judgement, a thought about lineage and succession." (From the Introduction by Andrew Forge, the exhibition organizer.)