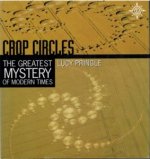 One of the founding members of the Centre for Crop Circle Studies, Lucy Pringle takes a serious and wide-ranging approach to her research into the phenomenon. She relates eyewitness reports, delves into the claims of hoaxers, explores the energetic effects that the circles have on visitors, animals and equipment, and also explores the possible link with sightings of 'balls of light' and UFOs.
In answer to a question in Share International magazine in 1991 Benjamin Creme wrote: "What the Space People are doing in the crop circles in particular is recreating to a certain degree the 'grid' of our earth's magnetic field on the physical plane. Each of these crop circles is a chakra, as it were, a vortex of magnetic energy, and they are spreading out around the world, having started in England." (Maitreya's Mission, Vol.III, 1993).
Based on her research, in this book Lucy Pringle makes various references to "energy lines" and writes in chapter 8, 'Luminosities, UFOs and Other Realities': "It would appear that the large majority of both genuine and hoaxed formations can be found on natural energy lines. That energy lines affect us more than we realize, due to their electro-magnetic emissions, is still not generally recognized." (p.101)

Interestingly, the author also refers to the legend of Apollonius of Tyana burying talismans "at certain chosen places around the world" (p.118). (Apollonius was the next incarnation of Jesus, in which He took the fifth initiation to become a Master of Wisdom, according to the Master DK in Initiation, Human and Solar, pp.56-57.) According to John E. Ross in Krishnamurti: The Taormina Seclusion, 1912 this legend was also referenced by C.W. Leadbeater.

Includes a 32-page full-colour section of crop circle photographs from 1989 to 1998.

Other books by Lucy Pringle are Crop Circles (Jarrolds, UK, 2004) and Crop Circles: Art in the Landscape (Frances Lincoln, UK, 2007)