The Walton Experience - The Incredible Account of One Man's Abduction (1978) 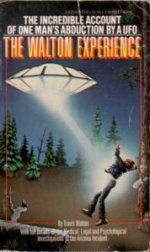 On November 5, 1975 a logging crew of 7 in the Apache-Sitgreaves National Forest in Arizona, including Travis Walton, started on their way home after finishing work for that day. When they saw a bright light coming from behind a hill they decided to check it out and found a large silvery disc of about 2.4m high and over 6m in diameter hovering above a clearing in the woods. Walton got out of the truck and ran towards the disc. The other crew members claim they saw a blue-green light from the disc "strike" Walton, who was only found again five days later.
Benjamin Creme states that Travis Walton was not abducted but invited, and boarded the craft of his own free will. He was taken out of his physical body, "which was rendered invisible and protected", while he was taken, in his etheric physical body, on board a mother ship where he had his experiences. According to Benjamin Creme Walton was asked to tell the world his story, but refrained because he was afraid of ridicule. (Benjamin Creme (2010), The Gathering of the Forces of Light, p.57)
In an interview with OpenMinds TV in July 2012 Mr Walton himself qualified the term 'abduction' that had been used from the beginning to describe his experience, saying: "I used to sort of accept the terminology 'abduction' but now I'm calling it more of an ambulance call..."

In 1993 Mr Walton's experience was made into a film, titled Fire in the Sky, which was also used as the title for the second edition of his book, published in 1996.