Witness to His Return - Personal Encounters with Christ (1991) 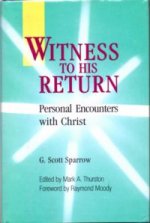 Therapist/counseler Scott Sparrow collected clients' accounts of encounters with the Christ. At the time of writing he had documented over 300 of these experiences, while the number seemed to be on the rise. The experiences which Dr Sparrow describes range from healing, receiving personal instruction, testing experiences to confirmations and reassurances. According to Benjamin Creme such experiences are one of the three ways in which Maitreya is making Himself known to humanity before His public appearance: in dreams, in visions and in direct physical appearances (Share International, July/August 1993, p.21-22).

A Letter to the Editor in Share International No.10, December 2006 (p.27-28) relates an experience of a woman on the subway in Toronto, Canada, in the third category, which she described in a podcast entitled 'Move outta my way' (Quirky Nomads, 16 December 2005). The old man which she describes at one point intimated to fellow commuters: "You look on TV, you'll see me. You will know who I am. This is not my real face." Benjamin Creme's Master confirms that this was an experience of Maitreya, Whose voice, as the 'familiar' that He used, can be heard towards the end of the podcast, saying (and singing): "OK, bye bye. I'll miss you. [Singing:] Enjoy yourself, it's later than you think. [Speaking:] Bye bye, folks. I'll miss you. Put an egg in your shoe and beat it!" After the doors of the train had closed, one passenger said: "Well, that certainly put a smile on everyone's face." And the podcaster reminisces how later, when she had exited the subway, "it felt like somehow that smile had stretched to include the entire city, so that the normally taciturn commuters were suddenly talking to each other..."

The foreword to this book was written by Raymond Moody, famous for his book Life after Life, in which he researched near-death experiences of his patients who found that their consciousness was immensely expanded after having left their bodies.