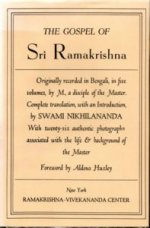 Originally recorded in Bengali, in five volumes, by a disciple of Sri Ramakrishna, this volume is a complete translation, with an Introduction by Swami Nikhilananda, and a Foreword by Aldous Huxley.

Includes twenty-six photographs with scenes from the life and background of Ramakrishna, among which the beautiful photograph of Swami Vivekananda as a wandering monk.

Swami Omananda references The Gospel of Sri Ramakrishna several times in her book The Boy and the Brothers (1959).