Ramana Maharshi and the Path of Self-Knowledge (1954) 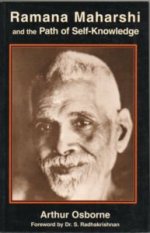 An account of the life and teachings of Sri Ramana Maharshi, whose Path of Self-Knowledge ("Who am I?") is referenced by Benjamin Creme in his preface to The Reappearance of the Christ and the Masters of Wisdom on p.11-12 (1979ed) and in the intro to the chapter 'The Overcoming of Fear' in Maitreya's Mission, Vol.III, p.273.
The companion volume to this book is titled The Teachings of Ramana Maharshi (Rider, 1962), which contains many of his actual conversations with those who sought His guidance.