Life and Teaching of the Masters of the Far East (1924) 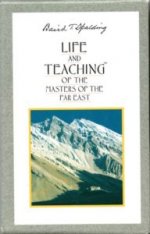 Baird T. Spalding (Bayard Spaulding, 1872-1953) was an American archaeologist and research engineer whose books played an important part in introducing to the Western world knowledge of the Masters of Wisdom. (Recent research suggests that Spalding preferred not to interfere with inaccuracies or contradictions about his life and travels; see the link for his biography above.)
His work provides examples "of descriptions of the Christ and the Masters, and the Buddha, as They are, as They exist." (Benjamin Creme (1979), The Reappearance of the Christ and the Masters of Wisdom, p.80) However, it should be remembered "that most of the extraordinary experiences of the group of which Spalding was a member were out-of-the-body experiences, and did not take place on the physical plane." (Share International magazine Vol.6, No.4, May 1987, p.18) Information from the French translator of his book seems to confirm that Spalding was indeed known among some of the great yogis in India.
His experiences were published in 5 volumes from 1924-1953. A sixth volume was published in 1996, consisting of "manuscripts, paper, letters, photographs, and other materials" related to the author, which were found in dusty cartons in the publisher's warehouse.

According to Benjamin Creme, Spalding was a 1.6 degree initiate and his descriptions are very accurate. However, most of what happened took place on the etheric planes (out of the body), which does not make the events any less "real". (See Share International Vol.7, No.2, March 1988, p.18, and Benjamin Creme (1993), Maitreya's Mission Vol.II, p.557.) 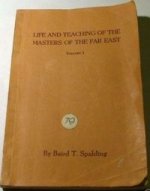