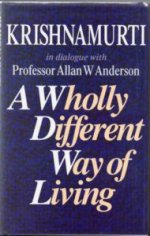 Transcripts of a series of 18 dialogues between Krishnamurti and Dr Allan W. Anderson, Emeritus Professor of Religious Studies at San Diego State University, that took place from 18 to 28 February 1974. These dialogues were filmed and broadcast on the local PBS station.

"In these eighteen dialogues with Professor Allan W Anderson, Krishnamurti indicates that pinning our hopes on organized religion, science, political ideology or the market economy not only fails to address the basic human problems but actually creates them." [From the dust jacket text.]
At the end of the final dialogue, Dr Anderson expresses the experience shared by everyone who is willing to listen to Krishnamurti: "I must express to you my gratitude from the bottom of my heart. I hope you will let me, because throughout our discussions I have been undergoing a transformation."

The 18 dialogues have been re-released on DVD by the Krishnamurti Foundation of America in 2006 under the title A Wholly Different Way of Living (Conversations with Professor Allan W. Anderson).