Education and the Significance of Life (1953) 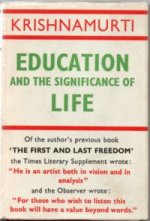 Edited transcripts of a series of talks about education and its significance for the world, first published in the US in 1953 (Harper & Brothers).
As penetrating and relevant today as it was in the early 1950s. This volume was only published by Victor Gollancz in 1955, after the huge success of its first Krishnamurti title, The First and Last Freedom (1954).

"Krishnamurti is ... one of the most influential of the many teachers today. At one time he was indeed being prepared, along with a few others, by overshadowing, as a possible vehicle for the World Teacher. When the Lord Maitreya decided to manifest Himself by means of the self-created body (mayavirupa) in which He now lives among us, Krishnamurti began his present teaching work..." (Benjamin Creme (1986), Maitreya's Mission, Vol.I, p.304.) 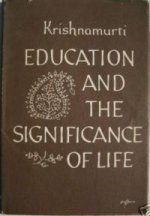