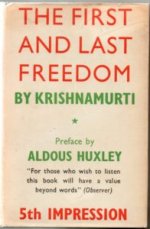 Krishnamurti has had a long and varied publishing career, with many of his talks and writings published in Great-Britain, India, the Netherlands, and the US. However, his work only made it into the mainstream bookshops when London publisher Victor Gollancz (and Harper & Brothers in the US) published this volume in 1954, in response to demands from all over the world for a comprehensive book on Krishnamurti's teachings, and to great acclaim -- both the UK and US editions saw multiple reprints within the first year of publication. The fact that Aldous Huxley wrote the preface further helped to propel this book into the public eye. A review in The Observer, quoted on the dust jacket of this fifth impression, said: "For those who wish to listen this book will have a value beyond words."
The book contains selections from the writings and recorded talks of Krishnamurti that are a clear contemporary statement of the fundamental human problems, in two parts -- his reflections on life, and his answers to questions put to him by his audiences. It covers a wide range of themes, from boredom and gossip to self-knowledge and God.

Gollancz (1893-1967), considered "a publishing genius" by some, was one of the founding members of the Left Book Club and had published George Orwell's first book, The Road to Wigan Pier, in 1937. He was one of the co-founders of the UK's Campaign for Nuclear Disarmament (CND) in 1958. Gollancz also published the first edition of Swami Omananda's The Boy and the Brothers (1959).
The 26 books by Krishnamurti that Gollancz would publish in the UK until the early 1990s were, often simultaneously, published in the US by Harper & Brothers (later Harper & Row). Only a handful of these are still in print from HarperOne, an imprint of HarperCollins which, ironically, is now [2007] part of the media conglomerate of Rupert Murdoch, which also owns the Fox TV News channel -- infamous for its insidious collaboration with the Bush administration's policy of fear-mongering in order to garner public support for the invasion and occupation of Iraq and restricting civil liberties at home.
Some Harper editions have been re-published by the Krishnamurti Foundation of America (KFA) which, along with the Krishnamurti Foundation of India, is the main publisher of K's books at present. This volume is still available from the HarperOne imprint.