A Timeless Spring - Krishnamurti at Rajghat (1993) 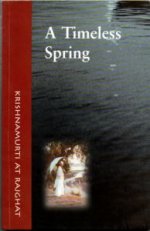 A selection of Krishnamurti's writings on Rajghat, covering the period 1955 - 1985, with the main part of the book consisting of talks to students and discussions with teachers at the Krishnamurti school there, which was started between 1928 and 1948 as the Rajghat Besant School.

Although most of these writings were previously unpublished, some parts of the chapter 'Landscape', in which he describes the surroundings, were taken from his Commentaries on Living series, while the Dialogues were taken from other previous publications.

In 1953 a 'Verbatim Report' was published (by Krishnamurti Writings Inc.) of the talks Krishnamurti had in 1952 with the boys and girls of the Foundation for New Education, as the school in Rajghat was known then.