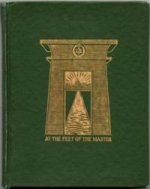 Treatise outlining the requirements for spiritual growth -- the ultimate aim of education -- given on p.2 as Discrimination, Desirelessness, Good Conduct and Love.
Written under the pseudonym of Alcyone when Krishnamurti was only 15 years old, this treatise is the teaching of the Master Koot Hoomi (Benjamin Creme in Share International No.5, June 1999, p.26). With a frontispiece portrait of the author.

"[Krishnamurti] was thought by certain members [of the Theosophical Society], Leadbeater and Annie Besant in particular, to be the coming Christ, the World Teacher. ... He was in fact being prepared -- he was one of a small group being so prepared -- as a possible vehicle for Maitreya to manifest through. The plan was changed and he was no longer needed in that way. Maitreya decided that He, Himself, would come." (Benjamin Creme, The Reappearance of the Christ and the Masters of Wisdom, p.210, 1979ed.)

The young Krishnamurti features in a 1993 episode of The Young Indiana Jones TV series, titled 'Benares, January 1910' (season 2, episode 15; later re-released with the episode 'Peking, March 1910' as 'Journey of Radiance'). In this episode the young K expounds the principles of Theosophy to the young Indiana Jones.