Unconditioning and Education - The Need for a Radical Approach (2015) 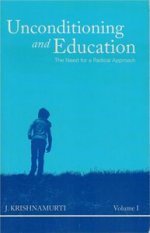 This book presents a series of dialogues between Krishnamurti and teachers and parents prior to the establishment of Oak Grove School in Ojai, California, where they discussed the conditioning effects on children and educators of teaching and environments in traditional schools. Instead of broadening the minds of children in a setting that encourages observation and creativity, knowledge-based approaches condition them to conform to society.
Excerpt: "Is education merely to cultivate one segment of the mind to use knowledge skilfully? Is it possible to educate the totality of man, instead of cultivating memory as we do, and depending on that memory to act skillfully? The cultivation of memory and dependence on that is part of the degeneration of humanity, because then man becomes merely mechanical, always acting in the field of the known. When we are acting in the field of knowledge, we are acting according to a past pattern; so then the brain must be conditioned, it has no flexibility."

In 2017 Education and Unconditioning, Volume 2 was published. Together with The Whole Movement of Life is Learning (for staff and students), A Flame of Learning (how to educate teachers) and Why Are You Being Educated (for students), these two volumes provide a complete body of teachings for everyone interested in establishing a school for providing the right kind of education.
In 2014 a syllabus was published "with the goal of creating a space for authentic exploration of fundamental questions". Its title, Think on These Things, harks back to the title of an earlier book on education that was originally published as This Matter of Culture (1964).