The Pawn of His Creator - Early Contactees of Interplanetary Visitations (1995)

Second, revised edition of this posthumously published book by Henry Dohan (d.1990) which tells the stories of the early UFO contactees, most notably George Adamski. This book provides details of Adamski's life not found elsewhere (including the books by Lou Zinsstag), taken from "the priceless material left behind by Mr Adamski" and, according to the publisher, the author's discussions with Fred Steckling of the George Adamski Foundation. The Foreword in this book is based on the Foreword from George Adamski's first book about space travel, Pioneers of Space (1949).
This book is one of the few known sources for the claim that Adamski was educated in Tibet, to which Adamski himself referred in an interview about the founding of the Royal Order of Tibet in the Los Angeles Times of 8 April 1934; GAF president Fred Steckling referred to it in the June 1979 issue of Cosmic Bulletin, and again in 1993 in The Contactees Manuscript (p.2); and Lou Zinsstag includes a vague reference in her book George Adamski -- The Untold Story. Chapter 4 in the current book states that Adamski was sent to a Tibetan monastery at the age of 12 to further his education, with the financial support of family friend "uncle Sid" (p.35). Benjamin Creme confirms that "Uncle Sid" was an initiate Space Brother, and that Adamski did indeed spend several years in Tibet where he studied with the Masters. (See Share International No.8, October 2008, p.9)
The author also refers to L. Taylor Hansen's book He Walked the Americas (p.241), drawing parallels between the missions of Jesus and Orthon, and to Sathya Sai Baba (p.59ff; see under Avatars) in his attempts to show the connections between the major religions and the spiritual aspect of the Space Brothers' mission, though where he aims to outline the bigger picture his story gets entangled in conspiracy theories.

This book includes many photographs, illustrations and facsimile reproductions of top secret documents as proof of extraterrestrial presence and technology that have not been published previously. In the first edition several open spaces with captions indicate where photographs were meant to be included, but could not be obtained. One such was of a drawing left behind by a Space Brother above the entrance of the Disneyland attraction 'Adventure Through Inner Space', which was later replaced by a ride called 'Star Tours' (p.38).

The original comb-bound edition was undated, but the publisher has confirmed that it was published in 1995. Although 1000 copies were printed, only 500 were bound.

A textile and electrical engineer, Henry Dohan earned international acclaim in 1961 for his research into mass and macromolecular structures. The publisher, David R. Kammerer, met the author at an Adamski Foundation gathering in 1985. The cover was designed by artist Colin Pringle, whose father was one of the first witnesses to arrive at the site of the UFO crash near Roswell, NM in 1947, according to a note on p.[iii] of this book. 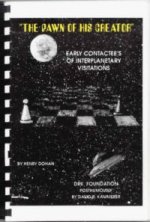