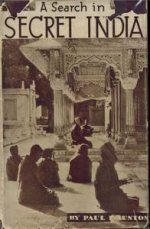 In his first book Paul Brunton (born Raphael Hurst; 1898-1981) describes his quest for wisdom and truth in India, where he travelled in the early 1930s. While calling himself a sceptic, the author shows himself to be open to the spiritual realm when he writes: "All over the East there have been recurring hints of a coming event which is to prove the greatest thing history has given us for many hundred years. The prophecy of a Coming rears its head among the brown faces of India, the stocky people of Tibet, the almond-eyed masses of China, and the old grey-beards of Africa. To the vivid and devout Oriental imagination, the hour is ripe and our restless time bears outward portent of the near approach of this event." (p.261)
In this regard, Mr Brunton records how Sri Shankara the 66th predicts the coming of the new Teacher in an interesting exchange about the political and economic conditions in the world in chapter VIII, 'With the Spiritual Head of South India'.
When asked when these conditions will begin to improve, Sri Shankara replies: "A change for the better is not easy to come by quickly... It is a process which must needs take some time." And "Nothing but spiritual understanding between one nation and another, and between rich and poor, will produce goodwill and thus bring real peace and prosperity." When the author expresses his doubt if that is a realistic hope, His Holiness replies: "The eyes of a patient man see deeper. God will use human instruments to adjust matters at the appointed hour. The turmoil among nations, the moral wickedness among people and the suffering of miserable millions will provoke, as a reaction, some great divinely inspired man to come to the rescue. (...) The process works like a law of physics. The greater the wretchedness caused by spiritual ignorance, materialism, the greater will be the man who will rise to help the world." (p.127)
Interestingly, describing the line of succession from the original Shankara (an earlier manifestation of Maitreya, the World Teacher), the author is told that "the first Shankara promised his disciples that he would still abide with them in spirit, and that he would accomplish this by the mysterious process of 'overshadowing' his successors." (p.124)
Also, the avatar Sri Ramana Maharshi (see the books by Arthur Osborne under Avatars) is first introduced to a Western audience in chapter IX, 'The Hill of the Holy Beacon' (i.e. Mount Arunachala) and chapter XVI, 'In A Jungle Hermitage'.

The first US edition of this volume was published in 1935 by E.P. Dutton.